M.C. Records is proud to announce the release of the first recording by Mike Morgan and The Crawl in 15 years, The Lights Went Out In Dallas. The street date is September 23. The Texas bluesman got some help on the recording from guitarists Anson Funderburgh and Shawn Pittman. The record features 13 songs, 10 of which are original compositions.  The Lights Went Out In Dallas is what Mike Morgan has been about for over 30 years, delivering deep Texas Blues with a touch of soul, R&B, and Americana. His guitar playing is as fiery as ever and makes you take notice. Guitar World Magazine called Morgan "a genuine blues guitar hero!!" Mike Morgan's first release came out in 1990 and he has recorded eight albums for Black Top Records and Severn Records. This marks the first release for M.C. Records and his 10th overall. Look for Mike Morgan and The Crawl to be performing more in the Fall and beyond.  Contact Mark Carpentieri – info@mc-records.com

Check out Mike Morgan being interviewed on Music On The Couch. Click the photo and go to show no. 628

Click the cover for all your listening and purchasing options. 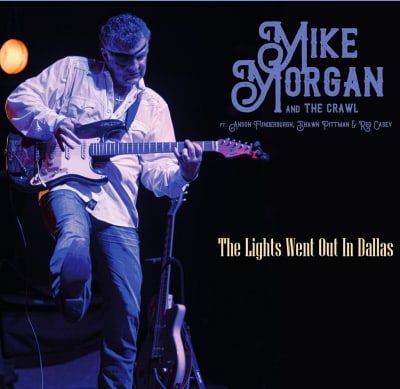